Bishop Basil of Wichita on the Syria Crisis

For more on the situation in Maloula, see the BBC here and al-Akhbar here.  This transcription was originally found at: http://araborthodoxy.blogspot.com/2013/09/bishop-basil-of-wichita-on-syria-crisis.html 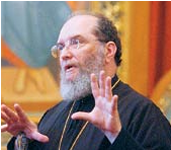 The following is the address given by His Grace Bishop Basil to the parish of St Mary Orthodox Church in Wichita, Kansas regarding the crisis in Syria, on the morning of their patronal feast of the Nativity of the Theotokos, September 8, 2013.

This week will be a very important week, an historical week, one way or another--our church, our Patriarchate in particular, and this world in general. This week our elected representatives will be asked to vote either for or against supporting aggression in the Holy Land. As I said it’s important first and foremost for our church. It’s where our spiritual roots are, the roots of all Christians. Not just us, but we as Antiochian Orthodox in particular, as our Father in God (Patriarch John of Antioch) lives there along with a million and a half Orthodox Christians.That’s more than we have total in the US. The Orthodox in Syria and Lebanon is not negligible, it’s 10 percent of the population. In our country, we’re less than 1 percent, our country being the United States.

Syria in particular but Lebanon as well, which is an integral part of greater Syria just by its geography and the majority of its history, is dotted with holy places. Holy places made holy by the presence of our Savior. Remember his conversation with the Canaanite woman, the Syro-Phoenician woman when he visited Tyre and Sidon in south Lebanon. It’s not in Disney World or Never Never Land. Its a real place with real people with real Orthodox Christians living there. You've heard of Caesarea Philippi, where our Savior went and had conversation with his 12 apostles saying, “Who do men say that I am?” and then to Peter “Who do you say that I am?” Caesarea Philippi is in Golan Heights, what now is the occupied portion of the Golan Heights. It belongs to our sister archdiocese, the archdiocese of Bosra-Hauran. And the Golan Heights itself is dotted with now empty, they were depocketed by the Israelis, Christian villages, Orthodox villages, whose churches during the occupation have been totally desecrated. Stripped. Not only of the icons and the chandeliers, but of windows, and water faucets. Their dead in Konetra were taken out of their graves, and teeth--gold teeth--taken from their mouths and wedding rings taken from the corpses’ fingers. These are holy places. Our Saviour walked there, the apostles walked there. Sweida, Bosra-Hauran in south Syria is where Timon, one of the original seven deacons as recorded in the Acts of the Apostles, one of the original seven deacons was the first bishop. Paul the apostle made his way from Jerusalem up to Damascus, and the road is still there, the spot where he was knocked off his horse by the presence of our Saviour Jesus Christ when he was struck blind. There’s a monastery there, an Orthodox monastery. These are not just places in books, brothers and sisters. These are holy places where Christians, your spiritual ancestors, and for many of you your physical ancestors have lived the Holy Orthodoxy for the past 2,000 years. It’s why what happens this week is important. It’s important.

We ask your prayers first and foremost for our president. That God might speak as we say in the liturgy “good things to his heart. That God might speak reasonableness and peace to the heart of our president. That he might speak peace to the heart of our elected officials, that they indeed become our representatives, that they speak the voice of the people. God speaks through his people, not through a congressman alone, or a president alone. He speaks through his people. May God hear our prayer for our armed forces. Men and women who sit on the edges of their seats to know whether they will be going to war or not. And don’t believe this “no boots on the ground.” It’s impossible. We’ve  heard the promise many times. May God give strength to the parents. The spouses first and foremost of those soldiers, and their children, and their parents and their families, that he might grant them grace during these next coming days to prepare for the tension that must be laid upon them. And God be with the people of Syria. All of them, whether they’re Muslim, they’re Druze, Christians, Orthodox and not. May he be with our Father in God (Patriarch John of Antioch) who has already lost thousands of his people, and priests and deacons and monks and nuns in the war already. Whose monasteries and churches have been occupied and many destroyed by the so-called Free Syrian Army. Whose own brother was kidnapped and still remains kidnapped, Metropolitan Paul along with Archbishop Yohanna, since April 22 by freedom fighters. Freedom fighters--people who rape women, abduct bishops, desecrate churches, open peoples’ chests and pull their beating heart out and eat it in their presence. That’s the Free Syrian Army and their allies, Al Qaeda.

Two days ago I received a call from our Metropolitan Saba Esper, who you know, he has visited here. He is the archbishop of our own Wichita diocese’s sister diocese in south Syria. He spoke by telephone, right before he called me, with Mother Belagia. Mother Belagia is the abbess of the monastery of Saint Thekla in Maalula. It’s only like a 20-30 minute drive north of Damascus. It had been occupied for 3 days (the town). The town is one of three where they still speak Aramaic--Aramaic which our Saviour spoke. The only 3 towns left in the world. The majority of the people in Maaloula are Christians--Orthodox Christians. There’s a smattering of Catholics there, and there’s also some Muslims there, and they live there in peace. The beginning of this week they were occupied by the Free Syrian Army. It turned out to be Al Qaeda, and they turned out to be Chechens--the same ones who abducted our 2 bishops. The nuns took the children there, orphan girls there of St. Thekla, and they and the nuns, many who are aging, into the caves of the village to hide for 4 days. They didn’t even go out to buy bread. The villagers didn’t leave their homes for 4 days. And if you’ve never been to the Middle East, they don’t shop like we do. They go every morning to buy their bread and food for the day. So they were locked in their homes for 4 days. Those who went out were shot, so they knew to stay in their homes. Saba called me on Wednesday. Mother Belagia, and they were ringing all the bells in the town’s churches--the Syrian Army, you know the one that we’re told is so bad. The Syrian Army finally came and drove Al Qaeda out. And what did they find? They found 2 churches in the village completely destroyed. St. Elias, which is ours, the Orthodox church in the village, and St. Rita, which is a Catholic church in the village--completely destroyed. On the inside, the icons, the holy books, everything had been desecrated. Not just ripped off the walls, but covered in urine. Real desecration by that wing of the Free Syrian Army. God knows what the people of Syria, and by extension the people of Jordan, the people of Lebanon, the people of Turkey and the people of Iraq--because if there’s a war there’s a regional war--God knows the burden they may have to carry this week. Lighten their burden as you can. And that’s by your prayers. Have a soft heart towards the people. Wrongs were done on both sides--vicious wrongs on both sides. But as we’ve heard from some honest politicians this past week, there’s really no good armed force over there. No one we can trust. None. So the choice is between the evil that we know and that we’ve had for 30-40 years in that part of the world, or another evil we don’t know about except what they’ve shown us in this awful civil war for the past 2 and a half years.

So this week, really pray. Thank God that we live in a country that is safe. Where we can send our children to school, where you can go out and buy your groceries. But realize that that blessed country where we live can also be a disruptive force in other parts of the world, as it has been. Remember Bosnia. Remember Kosovo. Remember what happened in Belgrade, the capital of an Orthodox country, bombed by our armed forces on Pascha night, while people were going to church for the midnight service. God bless America--but a lot of evils have been done in her name. We pray that God will restrain our leaders from being the cause for any more evil and sorrow and hurt in this world. That we might extend a healing hand, to bring enemies together like we’re supposed to. Where we teach people to turn the other cheek, where we teach people to bless those who curse them, to love our enemies. That’s the gospel we preach, the gospel we die for. It’s the gospel which Orthodox Christians have been and I guess will continue to die for. Remember them in your prayers, and as I said, most especially our leaders, who will make the decisions. That God might pour out his Holy Spirit on them, and speak good things to their hearts.