Performing Faith: Can you be God’s Actor? 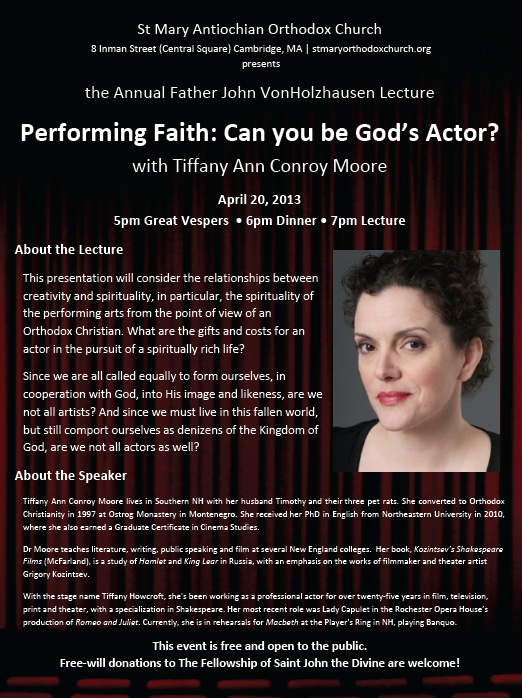 This event is free and open to the public. Free-will donations to The Fellowship of Saint John the Divine are welcome!

This presentation will consider the relationships between creativity and spirituality, in particular, the spirituality of the performing arts from the point of view of an Orthodox Christian. What are the gifts and costs for an actor in the pursuit of a spiritually rich life?

Since we are all called equally to form ourselves, in cooperation with God, into His image and likeness, are we not all artists? And since we must live in this fallen world, but still comport ourselves as denizens of the Kingdom of God, are we not all actors as well? 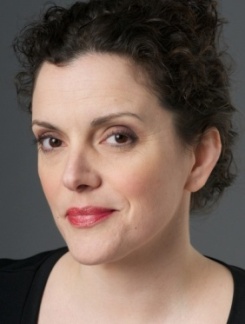 Tiffany Ann Conroy Moore lives in Southern NH with her husband Timothy and their three pet rats. She converted to Orthodox Christianity in 1997 at Ostrog Monastery in Montenegro. She received her PhD in English from Northeastern University in 2010, where she also earned a Graduate Certificate in Cinema Studies. ﻿﻿﻿﻿

Dr Moore teaches literature, writing, public speaking and film at several New England colleges. Her book, Kozintsev’s Shakespeare Films (McFarland), is a study of Hamlet and King Lear in Russia, with an emphasis on the works of filmmaker and theater artist Grigory Kozintsev. ﻿﻿﻿﻿

With the stage name Tiffany Howcroft, she's been working as a professional actor for over twenty-five years in film, television, print and theater, with a specialization in Shakespeare. Her most recent role was Lady Capulet in the Rochester Opera House’s production of Romeo and Juliet. Currently, she is in rehearsals for Macbeth at the Player's Ring in NH, playing Banquo. ﻿﻿﻿﻿